The newspaper described the fresh outbreaks as “scattered across 14 provinces and municipalities, including several port cities such as Qingdao and densely populated metropolises like Shanghai.”

China’s southern province of Guangdong reported 69 “confirmed” (i.e. symptomatic) cases of the disease on March 6, or the nation’s highest single tally that day. 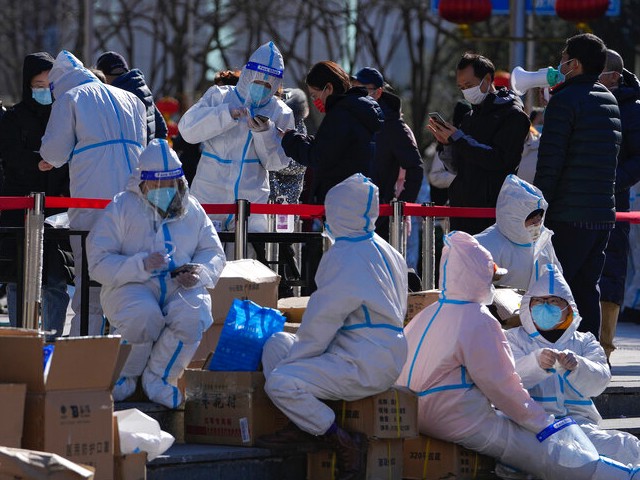 Workers in protective suits take a rest as people line up to register during a mass COVID-19 test outside a shopping mall in Beijing, Tuesday, Feb. 22, 2022. (AP Photo/Andy Wong)

The Global Times is published by the People’s Daily, which is the official newspaper of the Central Committee of the Chinese Communist Party. Both newspapers, along with most Chinese state media outlets, distinguish between “confirmed,” or symptomatic, cases of the Chinese coronavirus and asymptomatic cases of the disease.

“Qingdao has put 8,077 people under collective quarantine as of Monday morning [March 7]. The city of Jilin in Jilin Province announced on Sunday [March 6] the suspension of work and production, and asked schools to suspend classes,” the Global Times reported. 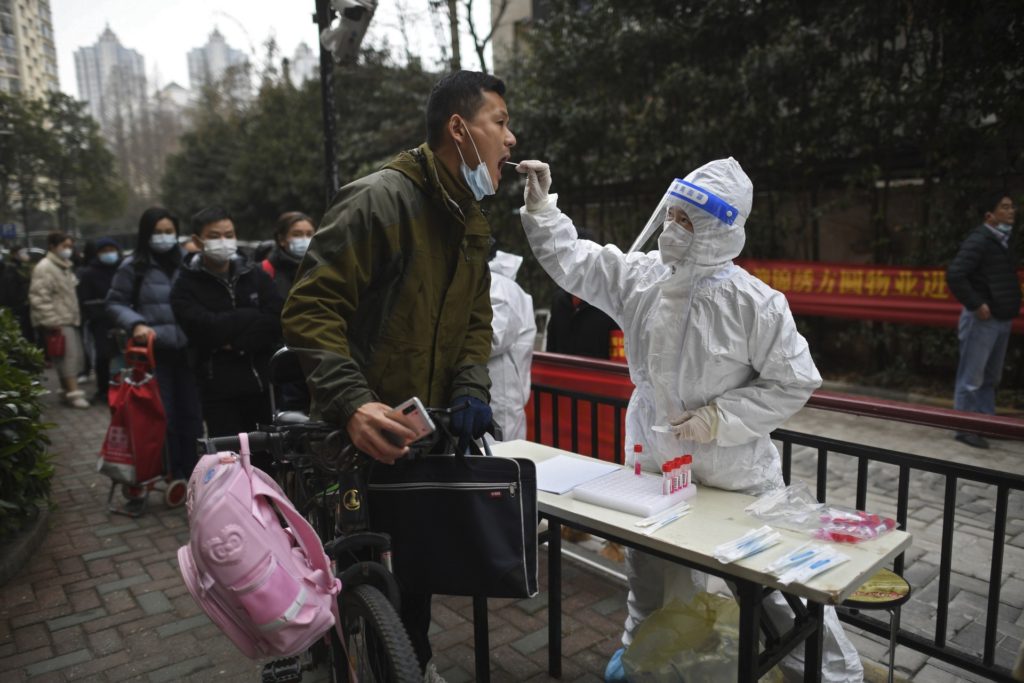 A man holding his bicycle with a school bag on it gets a throat swab during a mass COVID-19 test at a residential compound in Wuhan in central China’s Hubei province, Tuesday, Feb. 22, 2022. (Chinatopix via AP)

The newspaper revealed “several office and residential buildings” in Shanghai were under lockdown as of Monday due to the metropolis’s latest Chinese coronavirus epidemic. An unnamed Shanghai resident told the publication on March 7 his company recently asked half of its employees to work from home due to movement restrictions imposed on Shanghai’s populace by the local government.

Guangdong province — the site of China’s worst coronavirus outbreak currently — borders the city of Hong Kong, which has experienced a surging caseload of the disease in recent days. Reuters reported on Hong Kong’s epidemic plight on March 8, writing:

Hong Kong reported more than 43,100 new cases on Tuesday [March 8] after the launch of an online platform for people to record infections in a surge that has seen the city suffering the most deaths globally per million people in the week to March 6, according to the Our World in Data publication.

According to the news agency, infections of the Chinese coronavirus in Hong Kong “have surged to record highs with a total of about 540,000 cases and more than 2,300 deaths — most in the past two weeks.”

China’s National Health Commission (NHC) sent Liang to Hong Kong at the behest of the Chinese Communist Party to help the city combat its crippling epidemic.