A Muslim female college student arrived on campus in southern India’s Karnataka state on Tuesday and shouted “Allahu Akbar” (“God is Great” in Arabic) at a Hindu mob of young men who yelled “Jai Shri Ram (“Glory to Lord Ram” in Hindi) at her as she walked to class in footage captured by India’s News9 digital platform.

“[A] student wearing hijab (head scarf) was heckled by a large group of slogan-shouting, saffron shawl-clad boys in Mandya on Tuesday, February 8,” the news site reported.

The video recorded by News9 shows a woman parking her motorbike in front of an entrance to the P.E.S. College of Engineering in Mandya, Karnataka, on February 8. She appears to be clad in a makeshift niqab as she wears a hijab that incorporates a sanitary mask to cover most of her face. (A niqab is a Muslim veil that covers a woman’s entire head and face apart from her eyes, while a hijab is another form of Muslim veil that covers most of a woman’s head).

The student parks her vehicle and begins walking to class as a mob of dozens of young men wearing Hindu nationalist “saffron” scarves approach her and shout in Hindi, “Jai Shri Ram.” The young woman raises her fist while yelling “Allahu Akbar” in return.

News9 and several other media outlets captured the incident on video as they were already on Mandya’s P.E.S. campus to document a so-called “hijab controversy” that has swept across Karnataka school campuses in recent days. The right-wing Indian news site OpIndia summarized the unrest on February 8 writing, “Muslim students in Karnataka have been demanding to be allowed to wear burqa inside colleges while colleges say that the burqas or hijabs are not part of uniform and hence should not be allowed.”

Burqas are garments that cover the entire body, including the eyes. 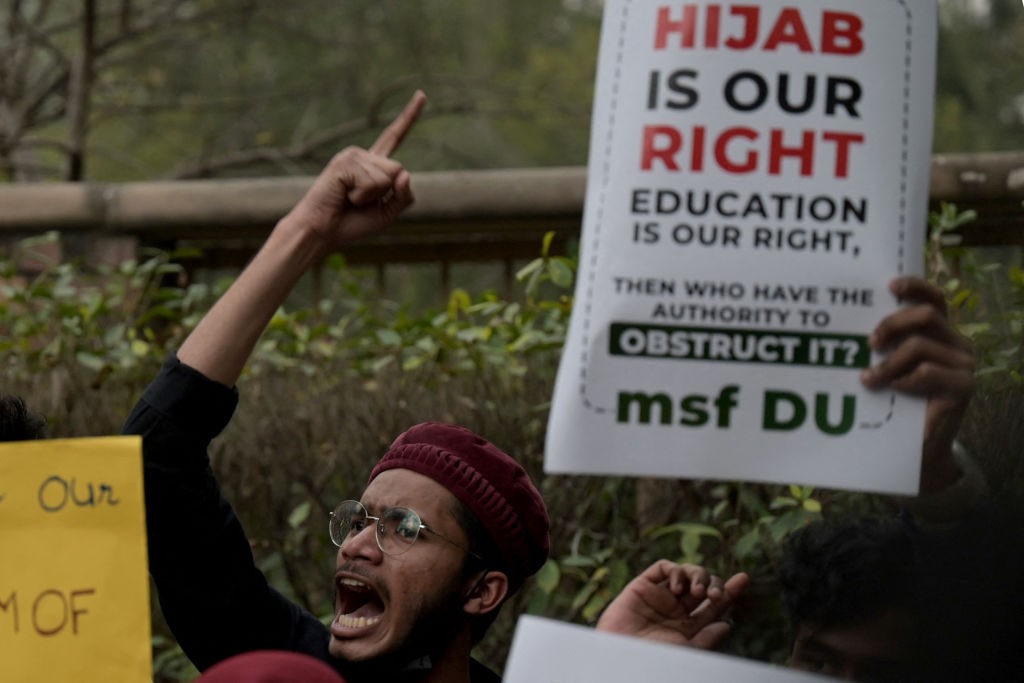 Activists from Muslim student federation shout slogans during a demonstration in New Delhi on February 8, 2022, to protest after students at government-run high schools in India’s Karnataka state were told not to wear hijabs in the premises of the institute. (MONEY SHARMA/AFP via Getty Images)

The pro-veiling protests began in January in the Karnataka city of Udupi after five Muslim students at Udupi’s Government P.U. college for Girls “alleged they had been barred from classes for insisting on wearing the headscarf [hijab],” according to News9. That allegation triggered unrest that “snowballed into a bigger controversy” across Karnataka state by early February.

“The protests have spread to more colleges with right-wing groups showing up in saffron shawls in retaliation. On February 5, the Karnataka government passed an order that barred students from wearing clothes that ‘disturb equality, integrity and public order,’” News9 detailed.

“[S]tudents who insist on wearing hijab should not be allowed into government educational institutions,” Karnataka State Education Minister B.C. Nagesh said at the time.

Karnataka Chief Minister Basavaraj S. Bommai responded to the “hijab controversy” on February 8 by ordering the closure of all high school and college campuses in the state “for [the] next three days.” 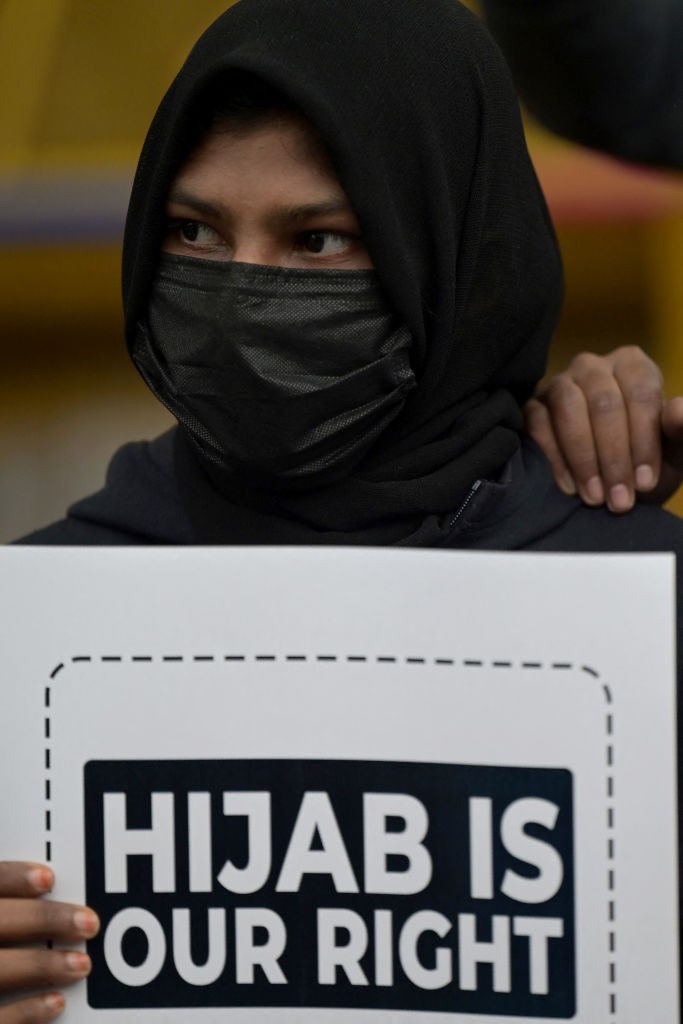 Activists from Muslim student federation hold placards during a demonstration in New Delhi on February 8, 2022. ( MONEY SHARMA/AFP via Getty Images)

“I appeal to all the students, teachers and management of schools and colleges as well as people of karnataka to maintain peace and harmony,” Bommai wrote in a statement posted by his official Twitter account.

“I have ordered closure of all high schools and colleges for next three days. All concerned are requested to cooperate,” he advised.

An estimated 84 percent of Karnataka’s 61.1 million residents are Hindu while just 12.92 percent identify as Muslim, according to India’s latest available census data (released in 2011). About 79.8 of India’s population in 2011 (1.2 billion) identified as Hindu. India has the second-largest population in the world after China with an estimated current population of 1.38 billion.