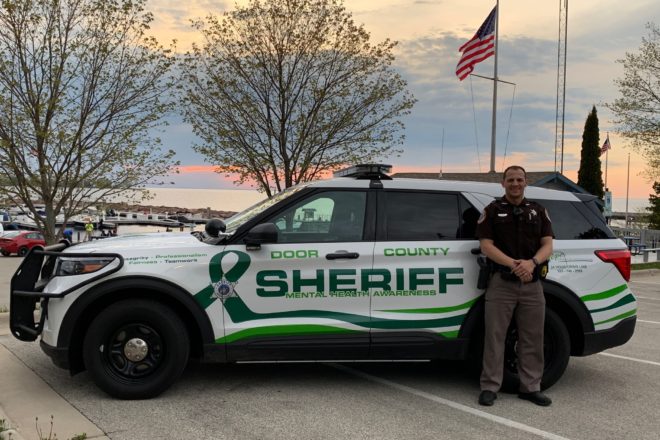 Unfazed by politics, local law-enforcement officers talk about the challenges and rewards of serving their Door County communities

When mental-health issues reach a 911 crisis level – often multiple times for the same person and family – it’s law-enforcement officials who respond to the call. It’s not a new trend, yet it’s “chewing up staff,” as Kewaunee County Sheriff Matt Joski put it.

Both Sturgeon Bay Police Chief Clint Henry and Carl Waterstreet, professional standards captain for the Door County Sheriff’s Office also said calls for mental-health issues increasingly drain resources. The officers and deputies who prevent and respond to crime are the same ones responding to the calls for mental health issues that include suicides, suicide attempts, substance abuse and increasingly, some homelessness.

With no local facilities, “finding resources for alcohol/drug abuse and mental-health concerns, it’s a huge problem for us,” Waterstreet said. That often means deputies must leave the county to transport people to places in Green Bay or Oshkosh or Madison, where it’s not uncommon to sit for hours waiting for assistance.

With no alternatives for law enforcement to triage a safe but alternative plan, “we’re taking every paper cut to the ER on the mental-health side,” Joski said.

In late 2020, the Door County Board of Supervisors granted Door County Sheriff Tammy Sternard approval to hire people to fill two new positions that evolved from the Staffing Analysis and Optimization Study done on the Door County Sheriff’s Office in early 2020. The 118-page report recommended 10 positions for the department. Sternard identified the two she believed were most needed: a professional standards captain and a mental-health and community-engagement deputy who would become the department’s resident expert on mental health issues and crisis intervention. Last year, Waterstreet was promoted to the captain position, Chris Ott to the mental-health and community-engagement position.

“We have no formal program for crisis intervention right now, so we will build that program,” Sternard told the Peninsula Pulse in late 2020, after the positions were approved. “If we deal with [people on mental-health calls] better up front, hopefully we’ll see a reduction in incarceration.”

Applicant Pools Shrinking, but Crime Not on the Rise

Those challenges across the state and country include hiring shortages and retention issues. Violent crime increased nationally and in Wisconsin in 2021, though not in Door County.

“We don’t have the statistics for 2021, but on the surface, it’s not up significantly, if up at all,” Henry said, a statement Joski and Waterstreet agreed with. Locally, the statistics are “always kind of behind the national curve,” Joski said, but also, crimes have changed, with break-ins and burglaries becoming less common due to security technology.

“We don’t see the bar fights we saw years ago, but now we’re seeing mental-health cases with people as young as 10 years old,” Joski said. “So it’s a changing environment, and we just have to respond to it.”

Kitchens also said there are 13,576 law-enforcement officers in Wisconsin – the lowest number in a decade – with fewer people entering the profession and retirements and resignations on the rise. Locally, Joski, Henry and Waterstreet said that law-enforcement professionals are aging out, and there’s also less stability among the younger generation.

“Millennials [those who are 25-40 years old], they work five to seven years and move on,” Henry said. “Our Generation X [41-57 years old], there was loyalty to the department.”

Although they’re able to hire the people they need – the exception is corrections personnel for the jail, an “area that we really suffer in our hiring process with,” Waterstreet said – the applicant pool is shrinking. The Door County Sheriff’s Office had 24 applicants for four patrol openings recently – a hiring opportunity that would have drawn some 100 applicants in the past. And of those 24, only 14 qualified.

“So it dwindles fast,” he said.

It dwindles because the qualities needed in today’s police officers and deputies have changed.

Before they bring new hires into the community, candidates must go through background, psychological and ethical testing.

“We do our best to try to really look into the soul of these men and women that we’re trying to bring on,” Joski said.

Kitchens said they don’t want to take for granted that issues stressing departments elsewhere in the state and country haven’t hit home, or at least not as hard.

“That’s really the big reason for doing this [press conference] today,” Kitchens said. “I don’t want this to be a real political thing. I’m happy to talk about the proposals we’ve put out to try to help address the shortage, but I’m not here to say that we have all the answers. I’d just like it to be a dialogue about the challenges they’re facing, and raise awareness.”

Kitchens’ press conference followed the release of a $25 million package of bills for law-enforcement recruitment and retention that Republicans want Gov. Tony Evers to pay for out of the $2.5 billion in federal relief funds Wisconsin will receive under the American Rescue Plan Act.

The Republican proposals ask for funding to reimburse training costs for police until Dec. 31, 2024; reimburse small police agencies to onboard and equip a part-time officer; spend money on part-time police academies; and establish a “Pro-Cop Wisconsin” marketing campaign to recruit new officers in the state, among other measures.

Democratic lawmakers and other critics have described the proposals as a political ploy, given the unlikelihood that Evers would approve the use of the funds, and given that Republicans chose not to adopt Evers’ previous spending plans that would have boosted aid to local governments by some $50.2 million. Local governments could then have used that money to increase departmental budgets and pay for the programs being proposed now.

“I didn’t do this to promote the bills,” he said Monday, and said the Republican package was not a political stunt.

“We could say that about every single bill the Democrats put out,” he said, given the unlikelihood of their passage in a GOP-controlled legislature. But Democrats have an obligation to introduce bills, just as the Republicans do, Kitchens said. In this case, Republicans are indicating how they’d spend the COVID-19 money, if they could decide how to spend it.

“If we controlled the money, this is what we’d do,” Kitchens said. “This is staking out our ideas.”

Unfazed by Politics, Supported by the Community

When asked whether they ever felt caught in the middle of the highly partisan world of Wisconsin politics, Joski said – and the others agreed – “It’s the nature of the beast.” The one frustration expressed was how big-city issues drive the national conversation that in turn drives federal and state funding that supplies supplemental grant programs.

“They’re putting down a lot of this money based upon what you might be seeing in Chicago and New York, and then we’re here in Kewaunee County, Wisconsin, saying, ‘I don’t need that; that does not apply to us,’” Joski said. “That’s what’s frustrating, is the priorities are driven by a hot-button topic.”

All three men said their departments were very well supported by the community, and they attributed that to the officers who build trust with their communities both in and out of uniform.

“The connection with the community makes it worthwhile being a law-enforcement officer up here because it feels like you truly can make a difference,” Waterstreet said.

CHICAGO — Chicago White Sox right-hander Lance Lynn thinks he is ahead of schedule in his recovery from right knee surgery.Lynn was pulled from his final start of spring training with right knee discomfort — one of a series of injuries for the reigning AL Central champions already this season.Third...

Voters With Disabilities Face New Ballot Restrictions Ahead Of Midterms

As voters went to the polls last month in the Texas primary, the voting rights hotline lit up at the nonprofit advocacy agency Disability Rights Texas. Molly Broadway, the group’s training and technical support specialist, heard from some frustrated voters with disabilities who had not received their mail-in ballots on...

Well, I must admit whenever I see the adjectives "weird" or "strange" I automatically feel the need to know more lol what is so weird? what is so strange? Sometimes I find it intriguing and sometimes I wish I didn't know lolThis article is all about the "strangest jobs in...