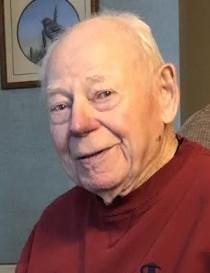 LeRoy Gordon Nelson (Gordy), 94, died in the comfort of his home January 11, 2022. He was born August 5, 1927, to John E. and Anna (Birkeland) Nelson, in the very room in which he passed, completing a full circle of life. Gordy spent his entire life on the Century Farm near Newport State Park except for a short stint in the Army Air Corp during WWII, and a couple of semesters at UW Oshkosh where he met the love of his life, Donna M. Sherman. They married on July 6, 1957. Together, with his parents they worked the family dairy farm until they purchased the property from them in 1962, and continued farming until they sold the cattle in 1981. During that time, Gordy was also the substitute mail carrier for Ellison Bay for a number of years before taking that position full time until his retirement. He was an active member of Trinity Lutheran Church/Shepherd of the Bay Lutheran Church and he served on the Liberty Grove Town Board and the Liberty Grove Mutual Fire Insurance Board for a number of years. Gordy and Donna raised three children and enjoyed 59 years together until Donna’s passing in December 2016.

Gordy may have given up cattle at a “young” age, but he never lost his love of the land and farming. He and Donna worked hard to maintain their beautiful property and were often hosts to many visitors where everyone enjoyed coffee or a beer and fellowshipping on the wrap around porch or in their cozy kitchen. Gordy was the quiet one, never feeling awkward in the silence. He smiled often, chuckled frequently, hummed constantly, especially when working on a project. When walking any distance became too strenuous for him, he invested in a golf cart which he would drive all around his farm and over to visit neighbors. He loved being outdoors and his independence. When cold weather wouldn’t permit any more excursions, Gordy had a favorite spot in a chair by the window at the kitchen table. From there he could look out on the entire farm and even view traffic on the road to Newport. He kept himself busy knitting his famous dishcloths, completing word search puzzles and when Christmas rolled around he was known for his Norwegian cookies called “krumkake” made individually on his grandma’s krumkake iron.

There really aren’t enough words to express what a wonderful man Gordy was. He worked hard, he loved deeply, he was humble and wise, and never spoke ill of anyone. He had a sweet sense of humor, always enjoying a chuckle over quirky little things. He was truly “the salt of the earth.” His presence filled a room with warmth and the house is very empty now without him. He will be deeply missed by all who knew and loved him.

A celebration of Gordy’s life and legacy will take place at his home on the farm this coming summer. The date and details will be announced later.

In lieu of flowers, please make a contribution to a charity of your choice in honor of Gordy.

Casperson Funeral Home & Cremation Services in Sister Bay is assisting the Nelson family. Expressions of sympathy, memories, and photos of LeRoy may be shared with his family through his tribute page at www.caspersonfuneralhome.com.