Norman Sleeter Uhler, 93, completed his heavenly journey home to reside with our Lord on April 5, 2022. At his passing, he was a resident of the Col. Robert L. Howard State Veterans Home, Pell City. 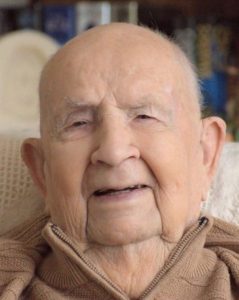 A Celebration of Life will be held at the Alabama National Cemetery, Montevallo, Alabama, at 10:15 a.m. on Friday, June 17, 2022, with Dr. Robin Scott officiating.

Norm was born December 31, 1928, in Decatur, Illinois, to Clarke and Lillie Uhler.

He served in the Army during the Korean Conflict before enjoying a long career as a machinist with the A. E. Staley Mfg. in Decatur, Illinois. Norm and his wife of 55 years, Betty, resided in Decatur and Mt. Zion, IL, until retirement, when they moved to Springville, Alabama. They were charter members of ClearBranch United Methodist, Argo, AL. Throughout Norm’s retirement, he shared his handyman skills with others and many of his oil paintings.

He is preceded in death by his parents, his wife, and brothers Ralph and Eldred Uhler.

In lieu of flowers and plants, please consider gifts to the Handyman Ministries of ClearBranch United Methodist Church, 8051 Glenn Road in Trussville.