LONDON (AP) – Queen Elizabeth II offered her support Saturday to have the Duchess of Cornwall become Queen Camilla – using a special Platinum Jubilee message to make a significant decision in shaping the future of the British monarchy.

In remarks delivered on the eve of the 70th anniversary of her accession to the throne, the monarch expressed a “sincere wish” that Camilla be known as “Queen Consort” when her eldest son Charles, the Prince of Wales, succeeds her as expected to the throne. In giving her blessing, the popular and respected sovereign is placing significant heft behind the move.

“When, in the fullness of time, my son Charles becomes king, I know you will give him and his wife Camilla the same support that you have given me,” the monarch wrote. “And it is my sincere wish that, when that time comes, Camilla will be known as Queen Consort as she continues her own loyal service.”

The message ties up a loose end that has hung over the House of Windsor since Charles’ divorce from the popular Princess Diana.

It took years for many in Britain to forgive Charles, the man whose admitted infidelity brought such pain to “the people’s princess” before she died in a Paris car crash in 1997. But the public mood softened after Charles married Camilla Parker Bowles in 2005 and she became the Duchess of Cornwall.

Although Camilla played a significant role in the breakup of Charles’ first marriage, her down-to-Earth style and sense of humor eventually won over many Britons. Her warmth softened the Charles’ hard edges and made him appear more approachable, if not happier, as he cut ribbons, unveiled plaques and waited for his chance to reign.

At the time of their marriage, royal aides had suggested that Camilla did not want to be called queen and “intended” to be known instead as Princess Consort – a first in British history. But the careful use of the word “intend” led to the possibility of change later on.

The move is seen as an effort to safeguard a smooth transition to the future as the queen navigates the twilight of her reign.

✍️ On the eve of the 70th anniversary of her Accession to the throne, The Queen has written a message thanking the public and her family for their support, and looking forward to #PlatinumJubilee celebrations over the coming year. #HM70 pic.twitter.com/U6JfzeZMLn

“This is the most extraordinary message. The queen is ensuring the transition, when it comes, to her son as king is as seamless and trouble-free as possible,” former BBC royal correspondent Peter Hunt told the Press Association. “She’s future-proofing an institution she’s served for 70 years. And for Camilla, the journey from being the third person in a marriage to queen-in-waiting is complete.”

The queen also paid tribute to the Duke of Edinburgh, who died last year after decades of serving as her consort, and to the work of her mother.

“I am fortunate to have had the steadfast and loving support of my family. I was blessed that, in Prince Philip, I had a partner willing to carry out the role of consort and unselfishly make the sacrifices that go with it,” she wrote. “It is a role I saw my own mother perform during my father’s reign.” 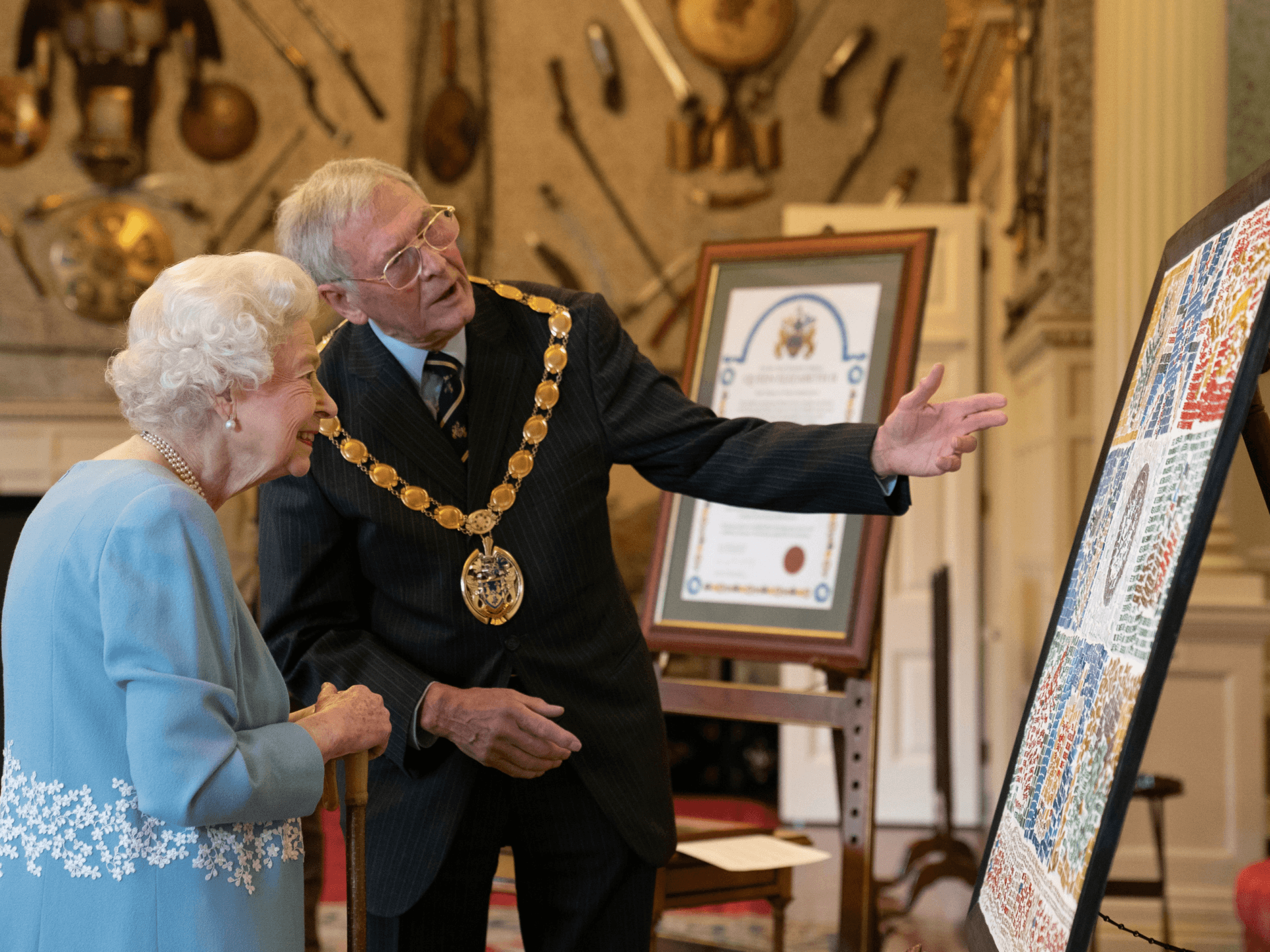 KING’S LYNN, ENGLAND – FEBRUARY 05: Queen Elizabeth attends a reception with representatives from local community groups to celebrate the start of the Platinum Jubilee, in the Ballroom of Sandringham House on February 5, 2022 in King’s Lynn, England. The Queen came to the throne 70 years ago this Sunday when, on February 6 1952, the ailing King George VI , who had lung cancer, died at Sandringham in the early hours. (Photo Joe Giddens – by WPA Pool/Getty Images)

Earlier Saturday, Elizabeth attended her largest public engagement since a recent health scare, mingling with guests at a reception ahead of her platinum anniversary.

The monarch met with members of the local community during a tea at Sandringham, her country estate in eastern England where she normally spends the anniversary. The 95-year-old queen leaned on a walking stick as she chatted with guests.

Despite recent concerns about her health, Elizabeth moved freely and appeared to use her stick more to lean on when she stopped moving rather than depending on it as she walked around the room.

The monarch’s health has been a concern since she cancelled a two-day trip to Northern Ireland in October and was quietly admitted to a hospital overnight for preliminary tests. Doctors advised her to rest and restrict herself to light duties.

But in her message, she promised she would continue to serve and said she was optimistic about the upcoming Platinum Jubilee celebrations.

“I am reminded of how much we can be thankful for,” she wrote. “These last seven decades have seen extraordinary progress socially, technologically and culturally that have benefitted us all; and I am confident that the future will offer similar opportunities to us and especially to the younger generations in the United Kingdom and throughout the Commonwealth.”

The sovereign signed the message “Your servant Elizabeth R.”