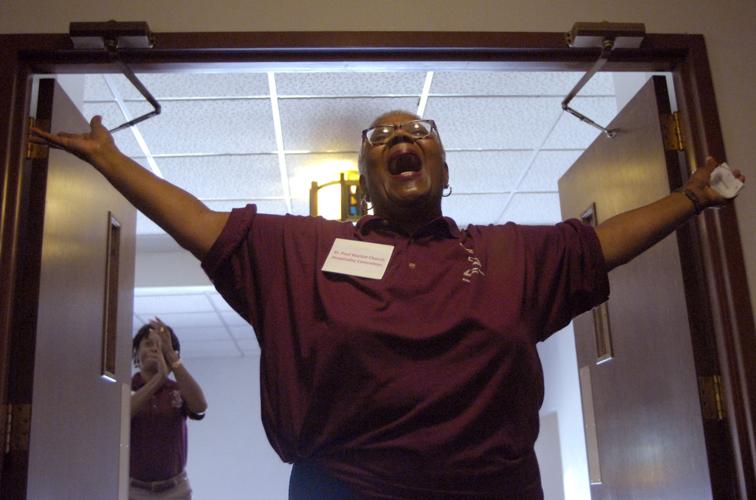 Diana Hines reacts to the music during a service Sunday morning, Oct. 8, 2017, celebrating 160th anniversary of the St. Paul Missionary Baptist Church, 1120 Grand Ave. The church was founded in Racine on March 22, 1857, as the Colored Union Baptist Church. 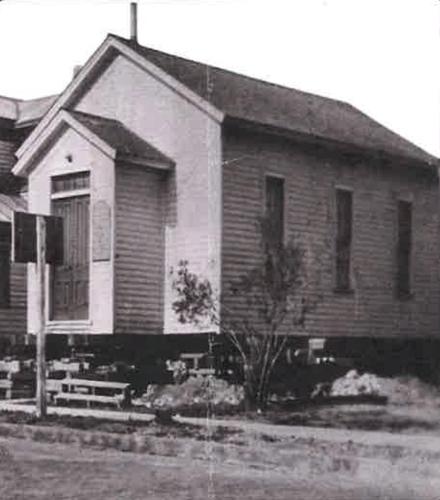 The since-replaced Colored Union Baptist Church in Racine, shown here, first held services March 22, 1857. It was the home of the founders Charles and Sarah Ware, and laid the foundation for what is now Saint Paul Missionary Baptist Church. 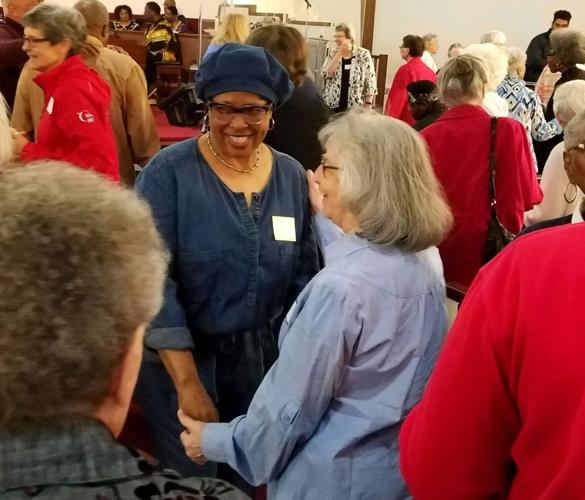 People greet during an event called Day of Reparation on Sept. 28, 2019, at St. Paul Greater Missionary Baptist Church, 1120 Grand Ave. The event was held to commemorate the 400th anniversary of when the first African slaves were brought onto American soil in 1619.

RACINE — Colored Union Baptist Church held its first services on March 22, 1857, in the home of its founders, Charles and Sarah Ware, only 16 years after the incorporation of the then-Village of Racine.

Almost 165 years later, Saint Paul Missionary Baptist Church, as it is now known, is celebrating the anniversary of its founding; all are invited to a celebratory service on Sunday at the church, 1120 Grand Ave.

Bishop Lawrence Kirby said: “We’re inviting the public to come, particularly all former members who maybe got their start at this church.”

He said thousands of people have come through the church, some of whom are now members of other churches.

Services will be held on Sunday at 8 a.m. and 11 a.m. The services also are to be livestreamed; details are listed on the church’s Facebook page and website.

Kirby has been the pastor at Saint Paul Missionary Baptist Church since 1981. He began his service in Tennessee and also preached in Mississippi before moving north to become the pastor of Saint Paul.

The Saint Paul congregation has much to remember and celebrate, he said.

Sometime in the 1850s, Charles and Sarah Wear moved from Virginia, a slave state, to Wisconsin, which was part of the 1787 Northwest Ordinance and therefore came into the Union as a state that prohibited slavery, sometimes called “a free state.”

“We do not know what brought them here,” Kirby said, and added they do know the couple had four daughters; the church has tried to track their ancestry, without success.

In the 1880s, the church purchased a little white schoolhouse and moved it to Campbell Street, later renamed Grand Avenue, between 11th and 12th Streets on property owned by the Wares, according to the church history.

The congregation worshiped in that schoolhouse until 1950, Kirby said, after which Saint Paul Missionary Baptist Church became to first African American congregation to build a church from the ground up.

The little church was relocated to an area near the current church and stood there until the late 1970s when it was finally demolished.

In 1986, a modern church was built on the property, facing Center Street.

The church had several names over the past 165 years. In 1888, it was reorganized and recorded in the Register of Deeds Office as Second Baptist Colored Church of Racine County, WI.

In 1916, following a dispute over the deed, the church was reorganized and recorded again, this time as Saint Paul Baptist Church Society.

In 1949, when it was discovered the church was registered under two different names in the Register of Deeds Office, the two names were consolidated into Saint Paul Baptist Missionary Baptist Church.

Kirby said churches have always been the central gathering place for the black community, whose members were blackballed from other types of community clubs and public institutions.

“So the church became that gathering place for the community,” he added. “And in a real sense it was and still is, in my opinion, the strongest institution in the African American community.

“It is the church, I believe, that led the struggle and the fight for more equality in the United States of America, right on the forefront of leading the movement in the ‘50s and ‘60s that did cause the country to enact more laws that are more fair to all the citizens, not just part of the citizens.”

He pointed out almost all of the leaders of the Civil Rights movement were connected to the church.

“In the midst of all the things African Americans went through, the church was the institution that gave them hope,” Kirby said.

Colored Union Baptist Church was a stop on the Underground Railroad, and a historical marker has been placed on the property to memorialize its history.

While the church started off serving the black community, it has long been integrated and has had a racially diverse membership.

When asked what the church had to do to have another 165 years, Kirby said it has to continue to have outreach programs, particularly for children, youths and young adults.

He said it’s important to show them the church is an institution that can “still instill hope in them and a sense of self-worth and belonging.”

He said some young people, particularly African American youth, do not have the kind of connection to the church that their parents and grandparents had, and are cut off from the hope the church can provide.

African American churches in particular, he said, are reaching out to young people and saying: “This is the place for you.”

St. Francis Friary in Burlington 146-acre complex may be redeveloped

Running at the friary

Running at the friary

Mass at the friary